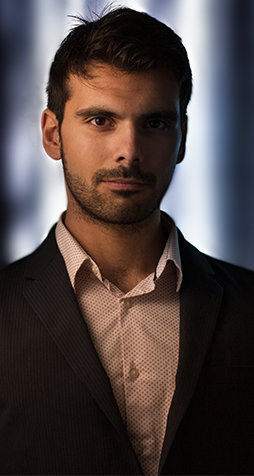 In 2017 I won the “Student’s Jury’s Award” for my short film “Self Control” at Moviemmece Naples Film festival, and in 2018 I won an award as Best Editor for the short film “We wanted to make pictures”, in which I was also the DP. The same short film won “Best Italian Short Film” at “Minneapolis–Saint Paul Italian Film Festival 2018”.

I started my own Italian production company in 2017, “First Child“, which in 2018 won the “Nuovo IMAIE Short Film Grant” to produce the short film “IDDA”. In 2019 we won the same grant again to produce the short “Don Gino”. In 2020 we are coming up with the short “Just the time for a smoke”, directed by Valentina Casadei, for wich we won the Emilia Romagna Production Grant; and we’ll start production for “The Soap Maker”, feature film realized in collaboration with the producers Lucas Foster and Gerry Pass.

For the first part of my life, I’ve worked as an actor, only to discovered my true and only passion: filmmaking. I have also worked as a Web Video Content Creator and as a Web Master/Designer during my past work experiences. I have a deep knowledge of social media and information technology. I’m passionate about storytelling and digital content, I gravitate around everything concerning movies, like editing, color grading, screenwriting or any other form of creation for the screen.

I have a BA in Art, Music and Show Bussines from Italian University Dams Roma Tre, and a professional certificate in Entertainment Studies from UCLA Extension. I completed various workshops with many of the best professionals in Italy: Marco Bellocchio, Daniele Cipri and Giuseppe Lanci among them.

In 2022 I’ll be the Associate Producer and Cinematographer for the movie “Single Latin Female”, directed by Dale Stelly.

I’m currently living in Los Angeles. I love every content made with boldness and passion.